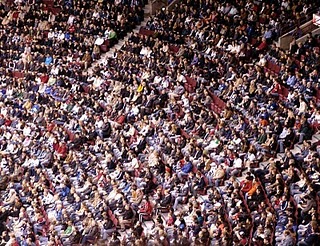 Recently, the Library Journal kindly made us aware on a new social movement taking place in libraries: Flashmobs. [1] According to Wikipedia a flash mob or flashmob is “a large group of people who assemble suddenly in a public place, perform an unusual action for a brief time, and then quickly disperse. The term flashmob is generally applied only to gatherings organized via telecommunications, social media, or viral emails”. [2]

You may all know about pillow fight flashmobs in public places: In social networks such as Facebook, young urban people conspire in meeting at a certain time for the desired performance. Flashmobs make take place at traffic junctions, underground stations, or … surprise, surprise … at medical libraries. What will the mob do there? Sometimes they hold „silent dance parties“ in order not to disturb the peace in the library. At the Carleton College library they gathered at an appointed time and place, and dance (silently) with headphones, listening to music synchronized to a starting signal. [3] They just looking for fun, enjoying themselves, making just these sort of things, which are prohibited by these stubborn librarians: noise, music, singing, dancing to ghetto blasters (on desks), sweating in crazy dresses, e.g. all kind of nonsense! Afterwards it was put on YouTube.

What is the motivation for flashmobs? Quite often, stress is mentioned, especially in the exam weeks. The extended library opening hours made long nights of learning possible – stress may be bottled up. Looking for an outlet, the library is a perfectly suited victim: Firstly, as professors do, they force people to learn, learn, learn. And secondly, librarians are always saying “shshsh…”!

What should libraries learn from flashmobs?

1. Security Issues
Flashmobs are not altogether safe. Large gatherings of people have their own dynamics; as with football stadiums, railings may crash, and mass panics may arise. For example, take a look at the flashmob arranged by US students in libraries: Hundreds if not thousands students gather “to have a flash mob rave on the night before finals … to help relieve all the stress”. [7, 8] You could become anxious for students and libraries as well. I’m quite ambivalent how to react: do you:

2. Marketing
On the other hand, flashmobs are ingenious tools for activating people. Maybe the library could use some of the underlying viral techniques for marketing their services. Think on services which badly need attraction, on polls, on demonstrations, on every kind of action where the library needs support by many people (not necessary users). Flashmobs (or Smartmobs) could be used for gathering interest, for getting attention, for kick off services. A beautiful example of such a flashmob is the one done by the students of the medical faculty of the Charité Berlin for celebrating the extension of opening hours of the Central Medical Library [9]. Why is it that libraries do not use the fascinating combination of videos, crowds, and music more often for marketing purposes? Wouldn’t it be great to be for once just an incredible cool library?