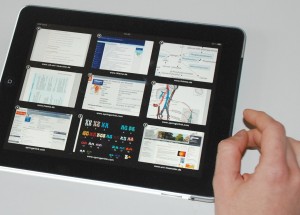 As I promised in the last issue, I thought about a new column title and finally decided on Emerging Challenges (Emerging Technologies is already taken 🙂 ). It will widen the coverage of this column to include all items which challenge me and other librarians in both our daily and future life, such as the mobile library, electronic media, future of reading, and social media (TTFKAW) of course (1).

Electronic books have gained in popularity, as evidenced by the latest figures from Amazon. It sold 180 e-books for every 100 hardcovers, and three times as many e-books in the first six months of this year as it did in the first half of 2009 (2). Although it is likely that these were only fiction books, the sheer dominance of digital is surprising. Will this development also penetrate the textbook market? What is their future?

A recent survey of 5.360 library users in Bavarian universities evidenced that half of the students have no clear preference for printed books any more, and 37% of participants could well do without the printed textbook, if an e-book was available (3). The UK National E-Books Observatory Project came to similar conclusions ― as almost every study in the last years (4). That could well be the beginning of the end of the printed textbook as we know it. Libraries are very concerned with these developments, because the printed textbook is one of their main attractions. For decades, acquiring copies of top textbooks and lending them out to students was both a rewarding service and a successful business model. Now libraries are struggling to find new strategies for the coming „age of the e-textbook“, which is mainly determined by the following three factors:

1. New business models
Decan Butler from Nature (5) compares the future development of textbooks with the music industry, which dramatically changed because “they relied on selling content on a physical medium, such as the CD.” In the same way, better e-bookreaders “could similarly disrupt the textbook industry.” Like the music industry, textbook publishers fear cannibalism (e-textbooks will undermine sales of hardcovers) and piracy (e-textbooks will be distributed for free on file sharing platforms). For only two reasons they are willing to go ahead: (a) “e-textbooks may offer them a way to cut into the largest threat to their profits: the huge market for second-hand text books,” and (b) if they do not put their foot into this new niche, the other publishers will divide the market under themselves.

One of the companies which may revolutionize the way of selling textbooks is CourseSmart, a coalition of 15 major textbook publishers (6). It offers more than 12.000 textbooks for up to 50% of the price of the printed counterparts. However, the discount comes with some major limitations: CourseSmart’s digital rights management (DRM) forbids students from moving a book downloaded on one computer to another device, and cuts printing at 10 pages. E-textbooks usually ‚expire‘ after their course has ended. Nevertheless, according to a study from the Northwest Missouri State University (NMSU), students like CourseSmart quite a lot, not because of the format or the DRM, but because it saves them money (7).

And even more surprising business modell is that of Flat World Knowledge, a New York based company, which creates electronic textbooks and distribute them freely. Their library friendly motto is: “Cheap prices are the most effective digital rights management.” [7b]

2. New content – customizable textbooks
Even if the content of the „new“ e-textbooks may not change at all, the composition of the content will change and allow for much more flexibility and customization, interactivity features, multimedia, and personalization. “E-textbooks as we currently know them will look drastically different five years from now” (8).

Macmillan, one of the five largest publishers of trade books and textbooks in the United States, launched the product dynamicbooks.com (“the new generation of interactive textbooks”), which allows college instructors “to edit digital editions of textbooks and customize them for their individual classes. Professors will be able to reorganize or delete chapters; upload course syllabuses, notes, videos, pictures and graphs; and perhaps most notably, rewrite or delete individual paragraphs, equations or illustrations” (9). These „Living Documents“ are embedded in a community and will be commented by the community – a changing document, whose data is constantly remixed and reused.

3. New e-reader: the iPad
In 2009, everyone was racing to be the ultimate multi-function device: a convergent evolution among e-readers, laptops, portable music players and smart phones. Now it seems the race is over. As always, Apple has taken the lead with the iPad whose charming playfulness makes it a great learning environment. The operation by gestures is obviously a very human attitude: to understand something by touching it. There is much potential in the iPad for enhancing students‘ learning experiences and being part of the next evolutionary step for textbooks. What device the iPad will replace? Gerry McKiernan and CourseSmart sum it up perfectly: “the iPad makes a lousy computer replacement, but does a great job of replacing paper” (10) and “for college students, the answer might just be that the “device” the iPad replaces is the printed textbook” (11). Consequently, CourseSmart recently launched an iPad application for reading textbooks (12).

Since the end of June, an iPad has been in everyday use at my own library. It has proved highly efficient for information presentation at a workshop. It is a mobile device for convenient and playful use of information of any kind. And it is precisely this very combination, mobile, comfortable, playful etc. that explains its great advantages over the alternatives: Smartphone, laptop, EeePC, Kindle (13).

I can also imagine the iPad being used very well in hospital wards, in presentations or in team meetings as a multimedia information machine, loaded with e-books, reading lists, pharmacopoeias, lecture recordings, videos of procedures (via iTunes U), e-learning tools, patient education tools etc. The Branch Library of Medicine at Munster are already lending out iPads preloaded with a pleopthera of respective learning tools, among them textbooks of course. The next step is just on the horizon: to embed this systematically and intelligently into the learning environment of the students, and merge it with the local curriculum. Here is the very place and time, where the librarian’s expertise will be in demand.