The Web enables access to the resources of a library for doctors and students from anywhere but the library. As a result, libraries are closing their doors. [1] The weakening connection between librarians and users is currently the great challenge of our profession. Frequently, libraries try to strengthen the connection by promoting feel-good factors such as providing food & beverage, nice furniture, architecture & facilities, and a good atmosphere. Sound and positive relationships with users are not only build by harmonious environments in which students feel comfortable, but also by emotional competent librarians, who accompany students from enrolment to exam. The connection can be maintained and improved by various means such as joint task forces, focus groups, library instruction via working lunches (or coffee & cakes), walking around, be open-minded for conversations, be present in social networks, and not only supporting users at study related problems, but also in a holistic way. As a result, students will feel themselves valued – not just as a user or customer, but as human beings.

Humour
Humour is both, a catalyst and an indicator for healthy, lively, and enjoyable relationships. In the following I would like to show, that by integrating humour into the library, the connection between librarians and users could become not only light-hearted but also highly rewarding.
There are many articles about the benefits of being humourous in library instruction courses, and even one which made it into PubMed [2]. In 2006, Walker gave an good overview of the topic, [3] and Trefts & Blakeslee delighted the reader by their increasing efforts to become funnier. Here is their motivation for using comedy in the classroom:

They learned about comedy, they became funnier, and incorporated it sucessfully into their library instruction. Many teachers will agree, that fun is as important for learning success as content: „If your students not having fun getting better, they’re not keeping it doing.“ [5]

Clowns
One excellent way of bringing humour to the library is the clown. In hospitals, “clinic clowns” or “doctor clowns” are well known for delivering “clown care”. As successors of Patch Adams they bring joy and laughter to small patients (but also to the elderly). Dr. Jerko (aka Bowen F. White) provides an insight on his work:

The Clown creates an environment for people that it is save to laugh and have fun and [as a results] they drop their defences. We don’t educate students in ways that are playful. We tend to not honour as a value for adults. When we’re valuing playing more, then […] we paying attention in new ways with beginners‘ minds, and see options and possibilities. To be playful, to game is a way to connect to people more fully, in a holistic approach. That’s make you feeling more fully alive, and a dull frontal presentation becomes a lively performance. [5]

The clown is capable of giving important impulses and acting as an icebreaker. Playing games is an important method for knowledge transfer in the educational process and can be used by anyone. Especially interesting is the absence of a hierarchy between the players:

The mother is doing stuff the kids can’t quite do by themselves, but the mother isn’t thinking ‚Oh, the kid can’t do it.‘ Instead, they’re playing a game together. And out of that game the kid gets exposed to stuff from which it can learn. [6]

The playful manner of the clown and his inborn neglect of any hierarchy makes him perfectly suitable for any educational purpose. In the library, he has the great advantage: he is definitely not a librarian. He stands outside the hierarchy of knowledge and saying “Ssshhhh…” He has a red nose, and with a magical smile he conjures the anxiety away, which prevents many students from connecting with librarians. [7] Overall, the clown brings a new quality into the relationship between the user and the library.

Library
Recently, at the medical library in Münster, Germany, a librarian dressed up as a clown interacted with students. He walked around, sat with the students and asked them which beautiful books they were reading and for what purpose. And what actually were they doing. Studying? He suggested that it looked more as if they were lazing around… 🙂 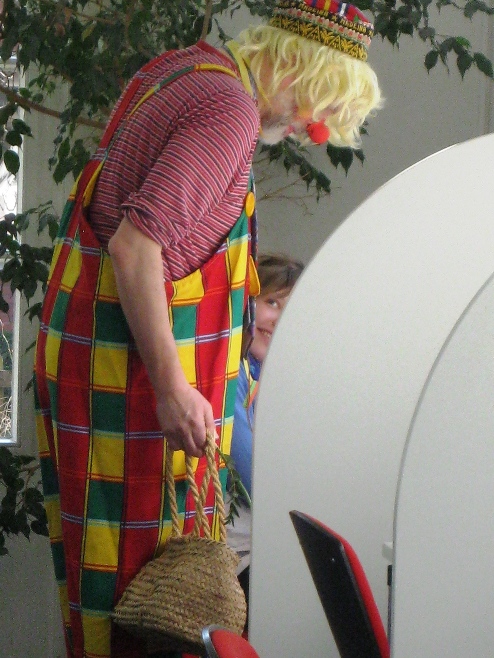 The library clown also handed the students sweets and roses, and some even returned his kindness with their own sweets. Within 1½ hours, the clown had had some 40 interactions, through which he obtained a detailed overview what exactly the students were doing, if they were satisfied with the library, and last but not least about their sense of humour.

Usually clowns perform as duos, in which one acts as the “Auguste” or “Redface”, while the other is the “Joey” or “Whiteface” character. Redface has good intentions and is good-natured, but foolish (but he thinks he is highly knowledgable). He is naïve, like a child and as curious as one. On the contrary, Whiteface is quite normal; he acts as the watchdog, and tries to prevent Redface from making mistakes (if he is not too angry with him) – similiar to Stan Laurel and Oliver Hardy, who acted that scenario to perfection. The library clown, acting as Redface, had a nice play with the students, which behaved quite normal. This character is perfectly suited for the study of information needs and satisfaction rates, because Redface is not only interested in everything but he is also very much welcomed by anybody to be curious and ask ‘stupid’ questions. [8]

The clown not only examine needs or delivers a course, but he tells a story. His costume and his makeup is already a story in itself and tells much about him. People love that, they pay attention and memorize better, what he is telling – a perfect premise for successful connecting with customers.

People love to be told stories. They don’t necessarily have to be nice stories, but they must be memorable. Whether you’re babysitting kids or closing a big deal [or explaining PubMed limits!], telling a story that’ll stick with your audience is the key: a story is a soft shell that seals in the facts and livens up hard data. [9]

Conclusion
Humour makes things easier in the workplace, as has been proven several times in libraries. Some may act as a clown even if they do not want to admit it [10]. And yet the obvious idea of a clown, who acts as a catalyst for customer relationships, is quite new in the field of librarianship. Nevertheless, as shown above, the library clown can improve many areas such as marketing, needs assessment, contacts and customer relationships, and avoiding clichés. Because the clown is not afraid to fail, he helps us to be brave and overcome our anxiety. Like Mevlana Rumi said: „Start a huge, foolish project, like Noah… it makes absolutely no difference what people think of you.“ To be a clown once in a while, prepares us to take risks, to be experimental and creative, and as such to live more fully, and eventually make work more rewarding. Remember: „Everybody is a clown, but only a few have the courage to show it.“ (Charlie Rivel)

This article was published in the November issue 2011 of the JEAHIL.

2 Gedanken zu „Humour and Clowns in the Library“